Enough With the Magic Already

Bounty is as easy as a strange berry on a sidewalk bush.

“The traffic looks beautiful right now,” I gushed into my phone while leaving a voice message for a girlfriend. I realized how weird the statement sounded once she responded with laughter over “beautiful traffic.” But I was driving at dusk over a highway interchange where the red-lit trail of southbound cars, along with northbound pale yellow lights, glimmered like beaded strings.

The sun had set behind layers of hills to my right, and ahead in the distance, the highrise cluster shimmered in downtown Los Angeles.

Even screenshots after Googling “interchange” proved to be true to the ribbony intricacy, and somehow sublime. 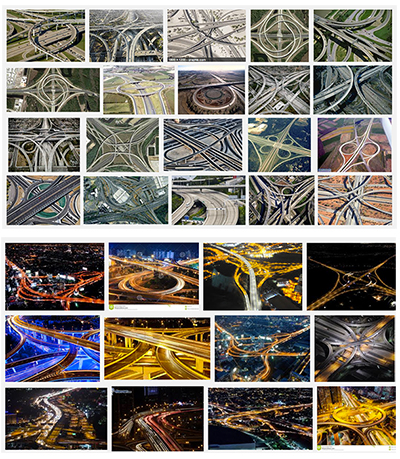 People thought I would hate Los Angeles. By “people,” I mean all the New Yorkers I left behind when I moved to the West Coast. I was a proper New Yorker too, still am, but I recognized New Yorkiness isn’t automatically negated by loving California. I get to enjoy deserts, oceans and mountains without giving up my big-city cred.

I’m a wide-eyed treasure hunter and bounty is as easy as a strange berry on a sidewalk bush.

Most importantly, in Los Angeles, I get to drive. No one in Manhattan has a license, much less a car (other than my brother). And by “no one” I mean none of my Manhattanite circles.

Driving is freeing, gives me a sense of the world as boundless. On the occasions I get lost, when I happen on a tree-lined street I haven’t seen before, it’s never not worth it. Taking a wrong turn in Silver Lake, where Sunset Boulevard takes on a dizzying quality going over and under other streets, means ending up on a path that opens to the lake.

Somehow the light and reflection work to make the surface silver indeed, and you’re no longer frustrated about not figuring out how to get back on Sunset.

Many times, the destination isn’t the outing the way the drive itself is.

Early in our relationship, while the Exceptionally Tall Man was driving, a solitary pair of geese, presumably mated for life since that’s what geese do, flew alongside and level to us on the highway against a backdrop of fields. Lovers interpret everything as a meaningful sign or a representation of themselves. Why couldn’t a flying goose couple mean celebration of our lofty romance? We reveled in the fact that both of our names meant “gift” and took every pleasant sight and breeze as our own personal gift too. It might be annoying to hear, but if you think about it, it’s not a bad way to live and there for the taking by anyone, not just “lovers.”

I’ve had the urge to write, “Everyone should make a point of seeing a sunset a day,” but I didn’t want to sound trite. Now that we’re here anyway, when is a sunset actually trite? Do you ever look up to a beautiful sky, splashed with the colors of a madman’s palette, and roll your eyes thinking, Here we go again?

Maybe I’m letting it get out of hand. Last week, I was late driving to meet friends at a restaurant because I caught a peek of the sky at the end of a perpendicular street. There, framed between two rooftops, some paunchy clouds and a setting sun were at play through unusual light and shapes. Rather than keep straight toward my destination, I took the first right. But the cloudplay was hidden behind a fortress of buildings, so I found myself zigzagging through the neighborhood in search of an opening to that part of the sky. 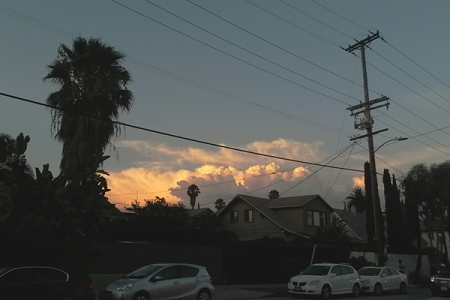 It wasn’t the first time I chased a sight I’d glimpsed while driving. In rush hour traffic once, I had pursued rows of long, thin sentinel palm trees silhouetted against an orange sky. It had taken me fifteen minutes just to go around one block.

On another occasion, I had stopped short on Sunset without warning and pulled to the left because this unreal white oasis appeared in our world, on a regular street.

Now, while my friends waited for me at the restaurant, I considered texting them a picture of the clouds and saying, “This is why I’m late.” But the picture didn’t capture the effect of that corner of sky flashing into view like a converging parallel universe. 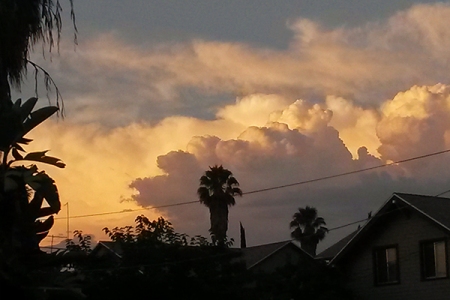 I’ve spent weeks putting together this preambular treasure and magic series so I can get on with an actual treasure hunt game for my readers. If you’ve learned anything about me, it’s that I’m obsessive and need to collect like items in one place, such as moments with the geese or the rooftop clouds.

The fairy garden party, the homage to magic men and how the alphabet and pictorials figure into the treasure hunt were all supposed to be one post. I only meant to write the series until I ran of examples of “magic.”

Except I’m not running out.

It turns out, enchanted moments aren’t just about what your eyes see, at least not in the sense of capturing them in a photograph.

How do I not tell you about my little niece’s Bag of Knots while I was driving my brother’s car in unmoving traffic during a New York visit?

She was seated in the back with no conventional means of entertainment while we inched along. But rather than complain, she grabbed hold of the only thing within her reach, a box of tissues, and came up with a game for herself. First, she tore off strips of tissue, then, she twisted and tied each strip into a little knot. She did this until she had enough of them to fill a bindle made of another tissue, which she secured with a hair tie.

“Here you go,” she said, handing it to me. “A bag of knots.” Talk about keeping like items together. And her game beat out traffic.

Or how could I not tell you about this:

I freelance at an ultra-cool casting studio, pictured below. Normally, all those seats are filled with actors waiting to audition, but I took the picture during lunch. A few weeks ago, we were casting “tough guys with square jaws in sleek suits.” One dashing man in a Prada suit brought his baby. While waiting, he got chummy with another handsome man in an impeccable suit. The latter auditioned first, and when he came out, he took off his jacket, rolled up his sleeves and held out his arms for the Prada man’s baby. He’d be watching the baby while daddy auditioned. 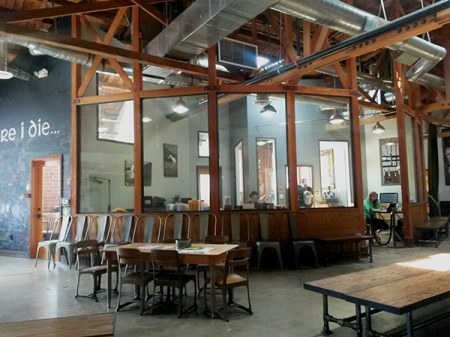 In the waiting area, I asked him if he and the other guy knew each other from before. They did not. I saw the tenderness and nurturing of one man toward another man’s baby, and it made me feel like the human race might be good after all.

As a teenager, I sometimes watched the rehearsal for one of my father’s performances. A large group of men and women with long hair and flowing robes harmonized vocals such as, “The simplest of pleasures, the smallest of joys.” At the time, it took effort for me to suppress eye-rolling yawns, finding it all too hippy mellow for my rock ‘n roll ways.

But fuck it, I’m old now, and if the simplest of pleasures and smallest of joys are trite, then, please god, let my life be trite every single day.