K is for kaleidoscopy, a word mosaic.

Kaleidoscopy is my attempt at a verbal mosaic. It hopes to capture the essence of the erased persons I used to be. During each version of myself, I wanted placeholders. So I wrote scraps, status updates, texts, emails—sentences that might revive a moment or an era for a future me.

Throughout, I dipped in and out of depression.

At times, I find these glued together, stylized—doctored—kaleidoscopic fragments to be glorified journal entries, ex post facto. Other times, I fall into them as if into a vat of multicolored swirling paint, where submerged, I can breathe the way I do in underwater dreams. 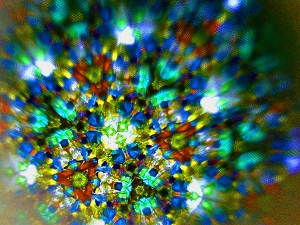 A tall man wants to go to the islands off of Australia to live on a boat for a couple of months. Even though I’ve only spent one day with him—among ribbons of light under the boardwalk—I say, I’m coming with you. He says, it’s not a bad idea. I tell him, I don’t cook.

My girlfriend tells me not to do it. She says, you’ll be trapped at sea with a hippy! A nonconformist, I correct. I tell her that if I’m a free spirit, I may as well enjoy free-spirited things, and that I’m recovering from a shattered ego thanks to some kid doctor.

Besides, he’s no more going to sea than I am. It’s fantasy.

She wants me to think about a different tall man, the cobalt-eyed, on-again, off-again bartender I don’t want to see anymore. She has witnessed his good manners, and this makes her think he’s suitable for me. I reconsider him for a moment. He and I both look like vampires, he says. We’re each pale and wear black.

Being a pair of vampires has its appeal.

She convinces me to text him to accompany me to a wedding on Saturday. I don’t like weddings and weddings don’t like me.

He leaves it open-ended, the wriggly handsome worm.

I refuse to follow up and go alone to the shiny, woodsy wedding and there, I have photo-booth fun with a sweet man. But he’s thirty.

I only meet thirty-year-olds. Men my age are too old to have fun. Unless they’re hippies.

~
What brought me here? Who are all these men?

I become a cave-dweller with my equally uncalm-in-spirit mate. We put up moldings and begin painting the rooms. We marvel at the hill view and ponder whether to buy natural firewood or the less-messy Duraflame for the fireplace.

~
2 a.m., Los Angeles. He is out of town. I’m on my way home from a party. I drive past the house and further into the Hollywood Hills with teary eyes. I feel a crease the shape of a question-mark in my forehead: What the fuck is wrong me? Was I drugged or is it just me again?

Fear climbs up my spine, and now I can’t drive further up the hill because it starts to look like my dreams, the ones with the witchy houses and a secret in one that I can’t ever uncover.

What brings the entire world and sensation into one concentrated drop of sting out of the eye? What am I supposed to do with all this want—lack and desire both. Why is all this hope still here when I’m so old?

~
Time on your hands leads to sinking. You need to go find meaning, wear it like a life vest, come back to the surface.

~
The thing is, he never wants to go anywhere with me.

March 6th: I act in a Western piece in authentic 120-year-old costumes with a well-known international director.

My relentless to-do lists are somehow nearing their end. I book something every month. I’m happy with myself other than I don’t get out of bed before 10 a.m. My garden is blooming, my house is freshly painted and furnished, and I am about to go on a four day trip.

He still prefers to stay home and work.

So I drive the five hours to the mountains with my brother and his friend. My brother and I trade off iPod playlists. It’s communion; we were once children together. He is about to be a father for the first time.

~
SPLAT…!!
…is the sound I make falling face first.

~
A couple of hundred snow and falling metaphors follow.

~
When you woke up this afternoon, did you see the shiny little bug crawling on the wall with more urgency than you’ve had in weeks?

~
I move out of the house on the hills. A six-year treacherous winter vacation follows and I stop booking once a month. It’s equal parts love and harm.

My hypnotic spinning wheel of a ceiling fan is purveyor of inspiration. I hear myself talking to myself. Is this because I’m crazy or experiencing momentary stress? It’s just momentary honey, you’re fine.

Yesterday, a 70-something homeless lady was upside down in the dumpster scuffling for cans. Today they’re sawing off branches, saying it’s good for the trees. It’s sad to see the fall of such alive green.

So much noise, all that buzzing.

Listen up, guy in hallway with stomach hanging over your pants, hollering Spanish into your phone: Your tile-work sucks and yesterday too, you thought nobody saw when you sang and danced the merengue.

Feeling guilty over sending mixed messages to a lone 6-year-old boy behind the gate of an apartment complex that I, the stranger, need to enter:

“Sweetie please open this door?” He does so after eyeing me.

I walk in with, “Thank you so much, but remember, never ever open doors to strangers.”

Poor little admonished thing looks at me with intent eyes, and for a second I wish I had some sweets to give him…

Sad little boy eyes… Makes me cave again while in the middle of break-up number three with the snow boy.

The maintenance guy finds a raggedy stray pup. At first I think he’s half possum, half poodle. He has matted fur and abandoned eyes.

Abandoned eyes… Makes me cave in the midst of break-up number four.

I drink too much last night, so I sleep over a girlfriend’s only to be awakened at 5 a.m. to the sounds of 100,000 woodland creatures. I come home. My body is rebelling against me.

I try to keep busy.

I go hiking with another girlfriend. Her red hair is bright in the sun. She’s outdone herself with charcoal leopard print excercise pants and a pink cashmere sweater. Meanwhile, I’m dressed like an arsonist with my gray hoodie.

Later, my car doesn’t start, so there I am, walking down the road with a container of gasoline…

~
Broken birds flock to me. They don’t see me trembling in the mornings like a hatchling just out of an egg.

Now I know. That’s what brought me here.