F is for the flight of the fairy, the pilot and the thrill-seeker.

I was plummeting to my death and wondered, why do humans have the urge to fly anyway? We don’t watch a squirrel in a suburban street and long to tightrope-run across electric wire, or catch glimpse of a bug crawling straight up a wall and wish we could do the same, or concoct ways to make our bodies slither like a snake. Yet we gaze at birds in flight and wish we could flap our arms and rise through the air.

Is it a matter of conquest? We’ve got land covered because we can run, even if not like gazelles, and water too, because we can swim, and it’s besides the point that dolphins are better at it.

Do we feel metaphorically caged up and flight would equal freedom?

All that flapping finally worked!

For me, it’s about the thrill. I’m already a speed and motion junky. Taking away the gravitational bond to a physical object “only” deepens the thrill immeasurably.

So I would’ve thought free-falling with my arms outspread for a minute and a half while skydiving from 18,000 feet would feel closest to the sensation of flying. In fact, the second time I went skydiving, when I knew not to waste the precious seconds of free-fall by undergoing shock the way I did the first time, I held out my arms and chanted in my head, I’m flying, I’m flying…

But no. The truest sensation of flying I’ve experienced is in the dreams I haven’t had for years. As a little girl, sometimes I would float, sometimes soar into the air and glide over the landscape. I would travel over bluffs descending into meadows topped with poppies and bee houses, and the sensation was pure. The feeling was peaceful and I was the embodiment of a Mahler symphony.

Skydiving, on the other hand, was anything but peaceful. The first time I threw myself out of an airplane, I knew I had to do so without hesitation because too much thinking would bring me to my senses. My body did not like or react well to this action: As far as it was concerned, finding itself midair attached to nothing — except the giant man strapped to my back who was also attached to nothing — felt like a most unnatural and desecrating act perpetrated against it.

In spite of the conscious, thinking brain, the body decided it was rushing to its destruction and assumed a state of shock.

No wonder they made you sign half an hour’s worth of papers and videotape yourself attesting you won’t hold them responsible for your demise. 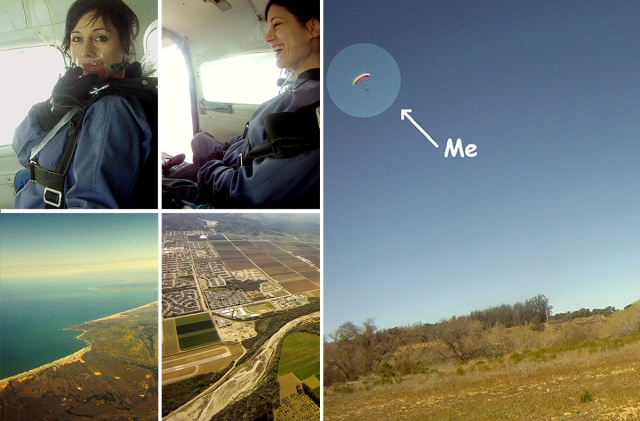 Falling didn’t feel like falling at all, but like a blast of wind slamming up against me. After my initial gasp of trauma, I couldn’t breathe. I thought it was because of the intense pressure of rushing wind and told myself not to panic, calculating I’d be able to inhale again in just under a minute once the chute opened. Only later did I realize nothing had been impeding my breathing except my own shock.

The chute opened, rather anticlimactically, and after landing with a gentle earth-tap of our toes, for the next six or seven hours, air-pressure pain ensued in my ears along with the worst motion sickness of my life. I looked at Freezer, who’d joined me on this jaunt for my birthday and was equally green in complexion, and shook my head, thinking that renting motorcycles would have been more of a thrill.

This was why, years later, it was important for me to go a second time. I knew what I was in for, and found a place in Santa Barbara that at 18,000 feet, offered the highest jump in the world and the longest free-fall. My first attempt had been at 12,000 feet. In Santa Barbara, the rattle-trap of a plane brought us up so high that we needed oxygen masks on board. This time, jumping out, I remembered to breathe and savor the experience — I’m flying, I’m flying — and found the patchwork terrain below almost as beautiful as those of my dreams.

The Fairy and the Pilot

Throughout various travels in Europe, Central America and parts of the United States, I’ve felt a sense of recognition toward landscapes I was sure I’d already visited in my flying dreams. Often, I wondered why the flying dreams stopped once I grew up, and how I could ever achieve that sensation of vastness, purity and peace as a “jaded” grownup.

It made sense to me to discover that my eight-year-old niece, the fairy, flies in her dreams. Flying is a gift of childhood. But she took it a step further and decided to design wings for herself in real life, probably for the same reason that my hobbyist Pilot Friend, formerly known as The Perfect Man, flies single-engine planes.

My Pilot Friend once flew me over California mountain ranges that I was certain I had seen in dreams long before moving to this country. (Let me share with you, roundtrip from LA to Mammoth in 45 seconds, via the video at the end of this post.)

As for my niece the fairy, she began her wing designs with cardboard stock and eventually graduated to heftier material. She is currently on her third or fourth attempt. She knows cardboard and plastic won’t actually fly, but she wants, just for one millisecond, while jumping from a park bench on a windy day, to reenact that euphoric feeling of flight from her dreams.

← Exposition to an Epic Love Story
My Five Encounters with Guns →
Join 4,665 other subscribers