The Bull that Almost Killed Me

☉ · by Gunmetal Geisha · in A to Z Musing, Adventure, Tripping · 9 Comments

B is for the bull I angered.

It was the height of mad cow disease in the neighboring United Kingdom, but that wasn’t why each time S. and I visited his family in Ireland, I marveled at the fact that they consumed meat three meals a day.

The parents were kind, no-nonsense farm owners. Six of their eight children were grown, and most were artists and travelers. They were stoic, with hardly a head turning toward the door among them when their brother and his girlfriend arrived from New York. For me, it took getting used to, because I came from a family who was all hugs and kisses — unless passionately arguing. In either case, our stock was warm-blooded, and even S. was privy to a dramatic hug-and-kiss attack from my family members now and then.

S.’s family considered me the high-maintenance city girl who needed more hot water to shower than the heating tank held, and olive oil instead of mayonnaise on her salad. Back then, at a time when there were no cellphones or internet, finding olive oil in rural Ireland was as difficult as finding saffron at a 7-Eleven.

I didn’t partake in much of the meat at meals because I was mostly a salad-eater. As long as there was enough lettuce around, I laughed at their good-natured ribbing about my city-girl “hypochondria” regarding healthy food.

Aside from S., I was most comfortable with his two youngest sisters, M. and B., who were eight and ten during that time. They were affectionate and free with their smiles. M. had light hair and eyes, a shy voice and sweet demeanor. B. with her wild, dark hair and sparkling blue eyes, was full of mirth and staunchly protective of her younger sister. The two were inseparable and their excitement at my arrival welcomed me whenever I visited Ireland.

At times, the three of us sat at the long kitchen table to draw comic strips and make up stories for the characters while S. would be out catching up with his mates. Other times, we visited the lamb shed or explored fields and country roads.

On one such occasion, we set out on three bicycles. We were seeking treasure. Treasure consisted of any small, rusty discarded item by the side of the road that we could assemble into sculptures.

It was a sunny, green day with clouds bubbling over rolling hills, the sort of countryside excursion that made you inhale deeply so that you might keep a bit in you.

Winding around fields and various narrow dirt roads, we came across a small abandoned house. The three of us stopped and descended our bikes, eyes glossy and wide with anticipation. Shrubs growing inside the house poked through the broken windows. The front door was covered in brambles.

There was no question, we had to investigate.

We left our bikes by the road and climbed over the rotting wood fence. The entire property was overgrown and through it, we walked carefully to the back of house where there was another door.

There we began to inch closer to the windows to peek inside. That’s when all at once, the girls stiffened. Both looked in fear to my left.

I turned to see what they saw.

A massive, dirty, cream-colored bull with savage eyes was watching us from a few yards away. 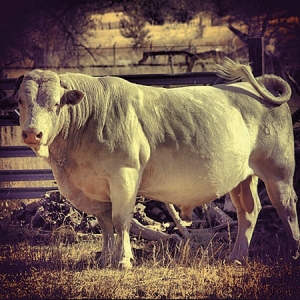 It must have stepped in from the field next to the deserted property. I didn’t understand the girls’ reaction — they lived on a cattle farm. Cattle roamed everywhere, even if usually fenced in. Maybe the girls knew something I didn’t.

I’d learned the distinction between a castrated bullock and a bull. I knew about the ferocity of the latter, how only one bull per herd remained uncastrated and how this creature would roam wild year-round even as the others were gathered in. But none of it registered at this particular moment, and as if I had any idea what I was talking about, I said in a calm voice to the little girls in my charge:

They did not listen to me.

B. hollered “Ruuuuuun” with a voice you wouldn’t expect out of a ten-year-old girl. At the same time, the monstrous bull came charging toward us. The three of us took off running toward the front of the house. The girls were ahead of me. The horror overtaking me at the thought of the bull catching up with them weakened my muscles, and I stopped short.

During the split second I took to pick back up while deciding to run toward the field instead of the front, the bull zoned in on me and changed his direction to mine.

Between the wrecked house and open field lay a giant tree whose bark was the width of a Mini Cooper. There was no place for me to go except hide behind it.

As crazed as he appeared, he wasn’t too stupid, and when I peeked around the tree, I saw him trotting straight toward me. He stopped to come around the tree, so I ran around to the other side of it. There I peeked again to see he had caught on and as before, he was changing direction toward me. Once more, I ran to other side of the tree as he was about to reach my side.

For a few minutes, a farcical chase-around-a-circle ensued, but I knew I could only double back so many times before getting caught and likely trampled to death. Then all went quiet and yet again, I peeked around to see him on the other side of the tree, facing me.

That’s when he began snorting and pounding his hoof against the ground in classic preparation to charge.

I was done for.

But I still reached for the closest object next to me on the ground.

It wasn’t a nice, heavy rock, or a sharp, sturdy branch. It was a measly twig the length of a finger and I held it in position like a teeny baseball bat. I knew full well its futility and felt silly, but remained in place when the angry beast came galloping around the tree toward me. Fear gave in to resignation as I prepared for the inevitable.

But then something inexplicable happened.

The bull reached me, stopped fearfully at the sight of the flimsy twig, turned around and ran off back into the field.

I didn’t waste time trying to understand and leapt forward to run toward the road. There, the girls were safely behind the fence. Once I was in their view, to my renewed horror, they started shrieking:

Rather than slow down by turning to gauge the proximity of the murderous bovine, with no hesitation, I dove straight into the row of what might have been nettles lining the fence. From there, I got up and climbed over in pain.

It was once I reached the other side that I saw there was no sign of the bull. My heroic — and extremely injurious dive — hadn’t been necessary. Still, the slew of cuts, bruises and thorns on my body were not enough to keep me from vast relief and semi-hysterical laughter along with the girls — as soon as we were safely pedaling away on our bikes.

Back at the farm, the theory went around that my “Mad Cow” had become spooked at the sight of the puny twig because it was about the size of an electric cattle prod. As far as the grownups were concerned, I was still merely the fanciful city girl who worried about excessive beef consumption, and was also some sort of wuss around cows.

But the girls and I knew the truth. First, that creature was no cow. Not with those sacks of unfettered rage bursting to inseminate an entire population of heifers. Second, whatever it had meant to the bull, that twig had granted me escape from brutal death at the hooves of a colossal, deranged beast.