Who Are You, I Think I Love You

I bit into a healthy number of apples from the tree of knowledge.

I developed a crush on a cartoon character. It’s true. And it isn’t the first time.

The first time, it was on Tintin, the intrepid star of his own comic books. He was brave, noble and compassionate, adventuring all over the world to right wrongs.

Most Americans didn’t know about him until Steven Spielberg’s animated The Adventures of Tintin. I didn’t care for Spielberg’s version because it failed to capture the almost-subversive humor and nuance of the books. Subversion is So My Thing that I might see it where there isn’t any, yet even I couldn’t project it on to the spiritless film version. But I’ve been obsessed with the Tintin books since I was six years old and still living in Iran. I’ve read the comics in Persian, English, French and Italian, and even as an adult, go through the entire collection every few years.

I may have been a Tintin groupie.

It never occurred to me that the diminutive, strangely asexual Tintin with the funny-looking quiff was a kid. And it didn’t matter, because when I discovered him, I was a kid too, and stayed a kid for a good many years before reaching the age where I’d be akin to his pervy old aunt — you know, if he weren’t a Belgian cartoon in plus-fours, and I, a flesh-and-blood Iranian New Yorker. 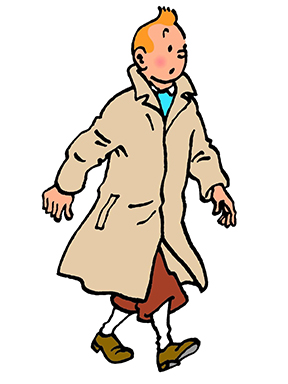 Tintin’s innocence remained intact for all eternity while I grew up and bit into a healthy number of apples from the tree of knowledge. Eventually, he proved too much of a goody-goody for my taste, and I outgrew my crush. But I remained devoted to his adventure books.

Enter my second cartoon crush, Sterling Archer, a self-destructive, hot-as-fuck spy with mommy issues. He’s inappropriate, immature, inconsiderate and an alcoholic. But lest we forget, Hot As Fuck. And his crystal blue eyes widen most innocently when it comes to his steely mama. Damaged, reckless and so much fun, he’s a lovable prick. Let’s just say, guys aren’t the only ones who see the merits of a “crazy” bedmate.1 Plus, underneath his brash dickness, there’s that vulnerable, evolving heart. It’s an evolution that may take a million years, but the important part is, there’s motion, however microscopic. It only matters that you believe in it.

In the meantime, he is absurdly good-looking. Or did I cover that already?

If he were a real person, people who care about you would constantly chide you for believing in him. He’s bad news, they’d say. But you’d know he’s a latent angel. They would look at you pityingly for your patience, and lecture you about not having self-respect in the matter. They’d forget that you yourself are fairly reckless and immature — I mean, you’d have to be immature to put so much value on “fun,” right?

They’d call you an idiot for forsaking noble Tintin and taking on emotionally stunted Archer. If Tintin and Archer were real people, to win your favor, one would try too hard, and the other wouldn’t try hard enough.

And both would annoy the shit out of you because of it.

But even if you could, you wouldn’t meld them into one franken-cartoon, because the truth is, you love them each exactly as they are. Well, except the annoying parts. You could only judge so much, though, since you’re no thornless flower yourself.

Sure, your friends would still feel sorry for you for stubbornly loving the selfish one in a carnal, can’t-get-enough-of-his-absurd-deliciousness way, and let’s not forget his microscopically evolving heart. In the same breath that they’d repeat, “he’s beneath you,” your friends would look at you like you’re a delusional peasant trying to sneak into a royal ball. Why though? Brainy but broke, aging geishas can’t go out with wealthy, good-looking spies? That’s just a mixed message on your friends’ part, not subversion.

So they’d end up annoying the shit out of you too. Soon, you wouldn’t know anyone who doesn’t annoy you. “You” would, of course, be me. So good thing for me, Archer’s only a cartoon, wink, wink.

If I were a cartoon character, it’s possible I haven’t been drawn yet. I looked anyway. I would’ve gone with Betty Boop because of the big eyes and dark curls, but I read somewhere she’s known more for heart than brains. Why can’t cartoon women get heart and brains? Also, she’s a sex object of spilling-out-of-her-dress caliber. It really works for her in the cartoon realm, but I couldn’t walk into real-life Rite-Aid in fishnets and a too-small hourglass dress to fill a prescription for say, amphetamines — not without the pasty guy behind the counter thinking I have a daddy complex, and besmirching the stellar relationship I do have with my father.

So I did a cursory search for “fierce female cartoon characters,” and was dismayed to find the paltry results included My Little Ponies. Is there such a shortage of human female cartoons that Google turns up rainbow ponies instead? The guys get to be skydiving, gun-toting savers of the world, but “fierce” girls get to be…a carousel ride!

There was a Disney Megara, befittingly “mysterious” with slanted eyes. But it was…Disney, antithetical to who I am. Also, she dated Hercules who’s way too brawny for my likes.

Then, stoic, fearless Trinity from The Matrix Comics flashed into my mind. When the movie came out, I had cropped black hair and couldn’t go to the deli without someone likening me to Trinity. It probably helped that living in New York at the time, I wasn’t big on smiling and wore a lot of black leather. 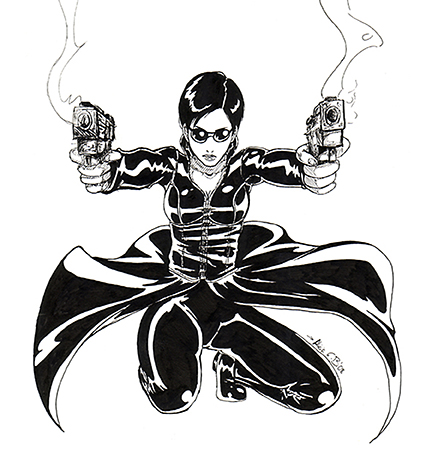 For those overcome with a torch/pitchfork cry of “You’re no Trinity,” take it up with the New York deli guys. Also, I’ll have you know, when I took a quiz to determine Which Game Of Thrones Woman Am I, I got Daenerys, Mother of Dragons. Not Arya, Sansa, Cersei, Milisandre, Ygritte or any number of powerful women on that show, but the one on track to rule them all due to her “balance of compassion and strength,” according to the quiz results, not to mention her incinerating capabilities via dragon offsprings, should compassion and personal strength fail.

All that to say, my capacity for self-flattery is boundless.

Never mind that the next quiz I took — Which Little House On The Prairie Woman Are You? — left my self-esteem permanently distressed for having gotten Mrs. Olson. No need to warn me those quizzes are data-mining tools — as a blogger I’m already volunteering a stockpile of personal information.

Finally, if you’re not convinced to play along with my Trinity conceit, I need to tell you about Spiderman down the street. On Hollywood Boulevard, in front of the famed Grauman’s Chinese Theater, you’ve got not just the celebrity handprints in cement, or the Walk of Fame embedded stars. You also have a rotation of freelance Jack Sparrows, Marilyn Monroes, Darth Vaders and so on, the majority of whom are expertly put together and truly impressive in costumery and makeup.

Then there’s the one Spiderman whose red and blue costume is both dingy and faded, sagging everywhere except where it stretches tight and threadbare around his monumental beer gut. Almost every time I drive by, he’s there. He is not tall and his posture is poor, yet do you see me jumping out of my car to yell in his face, “You’re no Spiderman!”? No? Then zip it about Trinity, thanks.

Let’s keep one foot in and one foot out, rather than let this Comic-Con roundup as thin metaphor slip away entirely. You already know how I feel about subversion, so along other lines of the “sub” prefix, if a post manages strata of sub-subtext, I’d be content to write even about a trip to the gas station. While I didn’t have a clear picture of where the post was headed, any subterranean shuffling of dirt is bound to turn up a find. This one took on a table-turning shape that doesn’t displease me: Trinity’s cooler than Archer, and that’s just fact.

I spend a lot of time puzzling out how people affect each other. Why is one man a crush and another a pest, when those same men might be the reverse to some other woman?

In my parade of cartoon characters, I discovered the unintentional trail of too goody-goody, too much of a sex object, and too brawny, none of which are undesirable if you take away the “too.” The right pinch and dash of personality traits determine your chemical reaction to anyone. It’s the difference between your internal, who are you – go away, or I think I love you.

I might respond to “fun,” when you, being you, respond to “respectable.” I might see “delicious” where you see “douchey.” What I look for even more than subversion, is goodness where others might see none. Imagine, then, how I’d swoon at the combination of goodness and subversiveness in one person. Or cartoon character.

Knowing I had a crush on Archer, you’d worry about me getting hurt. And if I were a pink My Little Pony, you might be right.

But I’ll just remind you that in the bigger scheme of cartoon analysis, Trinity is an ass-kicker and Archer is a joke.2

← Tongue-Tied
Turning Up the Knob on Your Humanity →