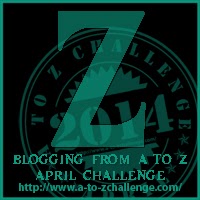 Letter Z is as much for Zenning out as it is for rocking out.

A to Z entries:  My post for each letter of the alphabet will be anecdotes or musings based on an element from the previous letter’s post.  Names always changed, events always real.

~ Letter Y was for You, and really, so is letter Z and…Zenning out. ~

A note about missing posts: If you’re reading the alphabet posts in order and discover missing letters, it likely means I’m revising and incorporating them into bigger pieces for other sites. Over the years, this blog has served my writing as a developmental and exercise space.

Never start off weak in a written piece. Flawed or irrelevant, fine. But weak? No, because no one will read past your first sentence, be it the first line of your screenplay, poem or article. Introduction, explanation and exposition can come later. The temporary un-anchoring of your reader might even turn out to be a good kind of disorientating. Not ending weakly is also crucial. If someone graciously follows your words to the very end, they are in fact, led by a promise. Your promise. Ending strongly is not only the fulfillment of it, but a thank you.

Here to end the alphabet posts with this letter Z piece, I’m not planning to deprive you of a proper thesis and setup. There’s a clear outline in my head — my meaning of Zenning out; how it applies to the final post in this A to Z exercise; its meaning beyond the self-contained context; and an anecdote or two in between. But I’m also letting the writing go where it will, wanting to take the disorienting ride along with you right up to the end and the “thank you” that doesn’t say the words.

First, though, my literal thanks for sticking by me, for seeing me through this task that ruled my every day for the past month. Thank you for listening to me about giving up quitting and being an (artistic!) itinerant. Most of all, thanks for letting me post unfinished, typo-riddled missives at 11:59 PM in this late and most liberal of times zones, Pacific Time. I polished the incomplete posts all through the night, and you pretended with me that I was keeping up with my A to Z’s.

I did keep up with them, though, in the final analysis, even if it felt like nine months, all along wondering if I would carry to full term. This, coming from a woman who has never borne children. A woman who’s dismayed that nowadays she calls herself woman as often as she does girl.

My nature isn’t so much Zen as it is Rock’n Roll. There’s an innate intensity to me; I exert more muscle strength than necessary. My jaw is toned because I chew food harder than other people. Writing with a pen tones my arm. If I scratch an itch, it might bleed. I slam on the keyboard like it’s a tribal drum. I like thunder, combat boots and black.

People will tell you, H. is very feminine. Perhaps in some respects. But sneezing, brushing my hair, or taking off my jacket aren’t delicate affairs. I have a firm handshake, and I don’t fear confrontation to the point that I could’ve been the asshole type if I didn’t bleed compassion. I don’t consider it a curse that speed and trouble give me a high, and that I get restless easily.

Well, less easily now. And there you have it. Zenning out, you see.

Rock ‘n Roll keeps you young, my old notes say. In that case, Zenning out keeps you peaceful. My uninsured car was stolen and I didn’t throw a fit. Zenning out means knowing there would be no point. Or I’m just lucky the mishaps that have so far befallen me haven’t crossed my Zen threshold. Zenning out is an acquired ability. It’s a gift of time and experience. That’s why woman is Zen and girl isn’t. The one good thing about aging is how comfortable you become being you.

Of course, I don’t claim a deep understanding of Zen. I somehow felt my broad-strokes knowledge of it was integral to the post, perhaps to prove, See, I’m Rock ‘n Roll and not Zen, I don’t even know what Zen is!

I once hit a piñata, and with two misses and one deft strike, it broke. It was at a wrap party on the stage of a black-box theatre. I had studied the handler raising and lowering the blue donkey in time against the blindfolded victim’s haphazard swinging, and I realized the handler did it with an unconscious rhythmic pattern. So when it was my turn to put the blindfold on, I was ready. Like the sword of a dragon-slayer, I swung the bat three times — whack, whack, crunch! — with such force that I worried, Oh god, they’re all gonna think I’m mentally unstable. Out poured the cheap candy and I walked sheepishly toward A.

“Tell the truth, did I seem like a crazy person?” I asked A.

“No,” he shook his head and looked pleased, “you were like Sid Vicious!” I beamed. Smashing the piñata was my Rock ‘n Roll moment.

Later, in an acting conservatory, Zen and the Art of Archery was required reading. The instructor announced it after his lecture on an actor’s training being no different than a dancer’s bar exercises or a pianist’s scales.

I never read the book. I was impatient, apparently not Zen enough, but I pieced together that for the duration of the entire book, the wretched archery student is allowed by his sadistic master to only pull, but not release, the godforsaken bowstring. I, a devoted disciple of instant gratification, viewed this as an elaborate mind-fuck, and not some spiritual exercise of bowstring-pulling mastery. No thank you, I was guitar-smashing Rock ‘n Roll. I should’ve been on a roller derby team with torn fishnets, a mouth-guard and a black eye! None of this yogic calm suited me. Or so I thought.

It takes years to accept you can be peaceful and patient, and that it doesn’t mean the Rock ’n Roll’s gone out of you. I came to realize much of what I called intense, was just tense. I came to realize, calm is good.

And in my way, I have finally completed a dogged Zen-like exercise, from A to Z. Wherever I had to be, whatever else I had to do, there was always a letter of the alphabet looming over me. I had to constantly fight my intrinsic urge to break free. But I made it through, and you came along with me.

And this fills me with a pleasing calm. 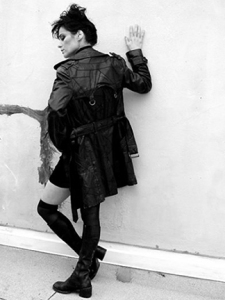 ~ Part of the A to Z Challenge ~
A post a day except Sunday for the month of April to cover topics beginning with each letter of the alphabet.
Cathartic Monkeyism returns in May.