The hospital bandages weren’t aesthetically pleasing when I wore a bikini.

My best friend, Lana (not her real name), ran towards me in the dark. I sat on the asphalt next to the moped I had just crashed driving us out of the hotel parking lot on the island of Santorini, Greece. She had been thrown into the air to land ahead of me at what seemed half a block away. She reached me after all those yards and gasped.

“Oh my god!” She stared down my body.

My gaze followed hers down to my right leg. Blood glistened under the streetlamp like something fake, vinyl, too orange. There was a palm-sized gash on my knee with streaks of blood trailing like streamers off a red holiday float. There was another ribbon-strippy mess of flesh on my ankle. Fucking fantastic.

The wheel of the moped had ground my ankle because I hadn’t let go of the throttle when I crashed. This was, in fact, my second ankle subjected to such a fate, and the second time in which I had crashed a moped in a European country with the wheel spinning on my flesh at full speed.

The first time had been my own fault. It was in Rome at the age of seventeen. I was driving my first stunted mini-beast that didn’t exceed fifty, and I learned the hard way you didn’t accelerate into a turn on gravel. Starting then, each time I crashed, I apparently held on to dear life by squeezing the life out of the throttle.

During the time in Rome, I was broke and on my own, and my left ankle looked massacred. With only a Eurail pass for unlimited train rides, I hobbled all over Italy, ignoring the green and yellow growing on my unhealing wound. This eventually landed me on a taxi-boat in Venice speeding to a hospital, which made me feel James Bondish. But at the hospital, a matronly woman in a half-nun, half-nurse outfit ruined my James Bond moment by taking what amounted to a Brillo pad to my ankle. She proceeded to scour off the green, the yellow, the feeble excuse for a scab and any skin remains.

I don’t remember tears, but having bits of me scraped off was as excruciating as it sounds. The woman then begrudgingly bandaged up my ankle. She didn’t look me in the eyes the entire time, as if letting my wound become infected made me some sort of degenerate who deserved far worse than her sadistic scouring.

Now at twenty-three, in Greece with Lana, I was certain this second crash was due to a faulty moped the Greek hotel people had rented to us not three minutes before. It was true that we crashed right out of the parking lot when I revved harder than I should have, yelling, “Hey Lana, check this out!”

Since it was her first time on a moped and she was more than a little anxious, I had seen fit to terrify my passenger even more by pretending I was about to pop a wheelie. But at that same moment, the front wheel seized up on smooth road like a bad punchline, which meant something had to be wrong with the bike and not my driving.

There is an unreality to the moment before a crash. It’s an eternal instant, an elastic fragment of time when one is still technically safe but knows what’s about to happen. As the semi-second before collision stretched on, I was in a state of calm lucidity, perceiving dozens of concurrent thought layers as if they were linear. All of it was accompanied by a matter-of-fact, I am about to crash and probably hurt myself badly and it’s so interesting that I have all this time to think about it. No life as such flashed before me, but the sheer volume of thought and consciousness in one millisecond left me a bit staggered.

A very dated me

The wheel seized, Lana flew in the air, the bike collapsed on top of me and the wheel — suddenly unseized — gnawed on my skin. Eventually I let go of the throttle.

Lana was shaken but oddly unharmed. Her long blonde hair still seemed brushed. She looked at me with giant blue eyes and an angel’s gaze. I wished she would readjust her expression instead of looking at me like I was going to spend the rest of my life in a wheelchair.

“A couple of scratches!” I said, feeling very pale. My body had taken a hit and somehow my psyche experienced trauma even though I was basically fine.

The next day, we rented another moped. We had no choice. The pain had set in; my knee and ankle were abominably swollen and I couldn’t walk. Like many New Yorkers, we didn’t have driver’s licenses, so we couldn’t rent a proper car. The Greek-only speaking nurses at the hospital made me limp across the street to the pharmacy to purchase my own syringe and tetanus shot to bring back for them to administer. Once again, I received dirty looks from medical staff as if I’d done something wrong.

The people of Greece in general seemed fond of me — I looked like them — but those around the village still shook their heads with disapproval when they saw me and a bandaged leg driving a moped. It wasn’t uncommon for silly tourists to get into moped accidents, but they didn’t often get right back on another to zoom around all those curvy cliff roads, especially when they hadn’t made it out of the parking lot the first time. I remained the driver because what terrified Lana more than my driving was her own.

Our trip package included hotels in three Greek islands of our choice during a two-week period, and a last day in Athens. We had picked Santorini, Ios, and Paros, skipping Mykonos, the ‘party’ island.

As Upper East Side girls, we had grown up among the rich without being rich. We considered ourselves cultivated and disdained mixing with Ouzo-slugging college types. While ‘party’ was fine with us, we perceived ourselves as more Monte Carlo in attitude than Las Vegas, when in truth we had the money for neither.

We had traveled much of Europe together since we were teenagers, but it was our first time in Greece. The islands captivated us. Those impossibly white structures with their turquoise domes hung off cliffs over vast drops and ocean views. The vision left our self-proclaimed cultivated mouths agape for many still moments. We ferried from one island to another, renting a moped on each where roads always wrapped around mountains with steep shoots to the water.

There were red beaches and dining on cliff balconies, music and cobblestone. We soon discovered that although walking was difficult for me, climbing down to hard-to-access beaches was less so. In fact, given that I found the motorbikes and the roads exhilarating, the only real difficulty I encountered from being injured was when I wore a bikini, the bandages weren’t aesthetically pleasing. That, and I couldn’t set foot into the azure Mediterranean. 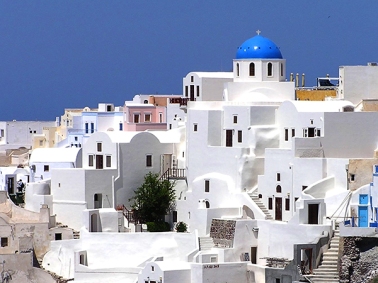 Lana had to singlehandedly deal with our mountain of luggage, which was a massive ordeal for two people, let alone one. She didn’t understand why I was able to participate in most of the fun activities with my bum leg, but none of the work. She had a point, and I had no explanation for why walking was no good, but climbing was fine. Or why dancing worked as long as there was no hopping involved, but carrying the weight of luggage did not. 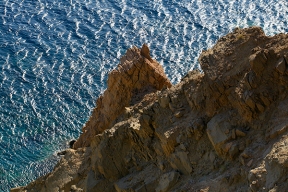 Her habit of clutching me but not leaning into curves with me as I steered the moped around mountainsides and cliff edges personified her growing stiffness towards me. In turn it worked my nerves and by the second week, we went about our touring activities in relative silence.

On one of our last nights, we went to a nightclub as was our habit. It was early and the dance floor was empty. We entertained ourselves by making up mock dance moves, both of us with pursed lips, because neither was about to be the first to crack a smile.

As the disco floor filled up around us, our dances grew more outlandish; we gave them names like Brushing Teeth, Tie the Noose and Pull, and The Hara-Kiri. From hygiene to suicide, it was all inexplicably funny to us, and our faces of stone began to quiver. By the time the dance floor became packed, while staring each other down and pantomiming disembowelment, we erupted into laughter, taking into consideration only our own absurdity, and not sensitivity.

We couldn’t stop once the laughter took over. We danced and ignored everything around us, and all at once, the bartender was beside us with two mysterious shots of blue. We shrugged, why not, and clinked glasses. Although we weren’t shooter types, we found it impossible to sip what tasted like hand sanitizer and cotton candy. So we downed the toxic blue syrup in one gulp, and our faces went through a rotation of grimaces. That’s when two burly bouncers appeared next to us. Before we could figure out why, they each held one of us by the middle. We had small frames and young faces, and seemed more girlish than we were, so being picked up like children in trouble was more of an insult than alarming.

The bouncers lifted us to the air, and when was they placed us on top of the bar, we finally understood what was happening. Lana and I looked at each other. The question wasn’t whether or not to dance, but whether we would treat the club-goers to our special choreography.

In the end, while we danced with verve, there was no re-enactment of hara-kiri or noose-pulling because we assumed — probably correctly — that no one else would share our “humor.” The bartender had his own joke, though, pouring lighter fluid along the front edge of the bar to set on fire.

Behind the border of flames, Lana and I continued to dance, making up with one another in the midst of being flambéed. But apparently, Greece wasn’t done with us. (continued) 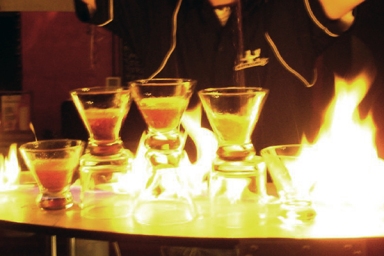