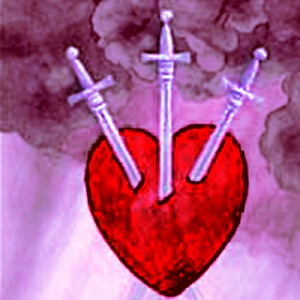 Give me unrequited love over requited apathy any day.

I once had a little burgundy room that required seven coats of the color when I painted the walls. On the floor lay deep red hand-woven rugs, silk purple cushions and Moroccan tables. I called it the Opium Room. In it, my writing desk sat between two windows that overlooked a heart-tugging Tuscan setting in the Hollywood Hills.

A grayed-out day came when rain poured relentlessly to drain the trees and hill houses of color. But my poppy room was a pulse of blood encased in glass, hovering over a watery world. How grand it was to sit within as if the rest of the world was a dream in grayscale.

At my floating desk, I wrote about my addiction to pathos. And hard hitting fixations that did away with my focus and emotionally incapacitated me for weeks. This time I had developed a mad, irrational, overnight crush. I thought I saw signs everywhere that there was a reason for it, something right about it, even if a ‘sign’ was merely our matching phone digits.

Perhaps it sounds too earnest to sober ears, but the sweet ache of that crush, the burning in the style of old verse, syncopated with my every second. It spun in the air molecules I breathed. Who is ever sober through a crush? I was mercilessly attuned to words, songs, birds, a delicious breeze. It wasn’t the first time.

I know it isn’t difficult to fall in love because I’ve thrown myself off that cliff again and again. As much as the crash is human breakage, the ride through the air is human flight. The patter of adolescent love in a grown-up heart is magic.

The way I see it, within three states of love — its abundance, its loss, or its neutral absence — the third is the safest, sanest place to be. It’s also the most deadening. I recommend it only if you have important work to do, such as figuring out cold fusion or finishing a novel. In fact, maybe just cold fusion, because you’d surely write your best novel while living with the loss of love,  assuming you’re capable of writing through your personal breakage.

As for attempting to get anything done while in the first stages of requited love, don’t bother. It’s true that new love demands the same attention as a nursing infant, but that’s not why. It’s because no matter what kind of druggie or alcoholic you may be, nothing skews judgment more than the beginning of love. Better to wait until your miracle is at least toddler-age. (If your love happens to produce an actual infant, all bets are off.)

Both the loss of love and pining for an unrequited love share the same context: something you want but don’t have. The difference is, having had love and losing it dismantles you, while wanting it prior to having it pushes together every bit of you to the brink of implosion.

In my Opium Room, I wrote every single day after I met him. I couldn’t help it.

He was a phantasm that both dwelled in me and surrounded me. I was owned. Years later, what stands out to me from that kind of crush is the habit-forming quality of the heart pangs. The feeling was imprisoning yet irresistible, like any addiction. Still I say, give me unrequited love over requited apathy any day.

Imagine all that pining and tension to be a cosmos of suns and shooting stars sealed inside your ribcage. Now, flash forward to the moment just before the first kiss, and you are face to face with the object of a universe of longing. The moment of culmination, that still micro-instant before the galactic combustion of your cells meeting for the first time, makes all torment over love worth it.

I would spend a lifetime prolonging the moment before the first kiss if love itself didn’t take over to run the show.

My fantastical crush and I ended up together. Somehow that added to the magic instead of taking it away.

I knew it was rare for anyone’s object of daydreams — and nighttime dreams and everything in between — to lead to a real relationship. It made sense to me that people subconsciously pick crushes they can’t be with because they’re addicted to the pathos, or the fantasy, or the dopamine, and don’t want it ruined by the reality of a flawed flesh-and-blood person. So call it fluke or cosmic design, but in spite of warning that such consuming fires burn out quickly, he and I remained together for a good many years.

Was it the default pining of long distance that infused the relationship with magic? So many hours spent on the road to reach each other. He was also a daredevil, therefore he could die, and though he gave himself to me fully like I did to him, I could lose him in one miscalculated second. Something, whatever it was, kept the moment of pre-kiss combustion alive even as we burned for one another, and continued to burn after pedestrian dysfunction led to our relationship’s demise. It took us another few years to let the love shift from abundance to loss.

The Opium Room existed in another lifetime when I lived in a dreamlike hill home. Those luscious blood walls have long been painted back to a conventional color, and this story isn’t actually about my fantastical crush come to life. Until him, I had loved truly and deeply in the best of relationships that hadn’t begun as crushes. He was one of many devastating crushes, but until him, none had carried over to real life in a meaningful, longterm way. The crucial element, however, is that when we met and my heart awoke each day aching, and ached still once we had one another, it proved to me that my reactions to situations, rather than the situations themselves, were the true cause of my torment.

In those days, the handyman not returning my call about reglazing the bathtub felt like a stomach punch not dissimilar to my love taking an hour to text back instead of the usual minute. I experienced all perceived rejection and censure the same way, be it getting honked at for cutting off another driver, or not booking a coveted acting role.

Did my false-alarm infatuations guess they could be my pet obsession, my latest form of self-torture, and still it was less about them than my attachment to an internal galactic conflagration? What it had always been about was my nature, an amphitheater where the actors shift but the stage is constant.

For me, suffering without a reason meant having the proportional capacity to feel great joy, the yin-yang of intense feeling, paradoxical in the same way really alive persons court death through daredevilry. If joy is renewal and renewal is born through destruction, well, birthing hurts.

Oh, but the birth.

It’s the first day on a trip in a brand new country; it’s laying eyes on that new love after a prolonged absence. Getting to know a crush is getting to know yourself all over again because everything you do and say becomes fresh.

And you know the tragic loss of childhood wonder, the loss that messed you up for life after you grew up? In those moments right before the first kiss, or as you touch a stone on an ancient Celtic castle, or watch the surreal glow of bioluminescent waves at night, that tragedy eases a bit, because life, stones, the veins of a leaf, brim with intoxicating, incomprehensible possibility.

Of course, for the too-earnest among us about love, the grandest of possibilities is a crush that could translate into enduring love.

A friend once asked me, “Do you want to stop suffering?”

I thought for a good hard minute.

I was the girl who wrote from the petal of a poppy. I floated in a drop of beautiful blood.

Not if it meant giving up my romance with pathos. And my capacity to perpetuate the moment before the first kiss. 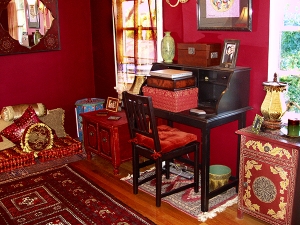 *This piece was originally written in response to a Weekly Writing Challenge. The October 21 assignment was on point of view, hence inspiring “His Point of View.” The “phantasm” is a flesh-and-blood person who exists and remains my friend. While he probably doesn’t share “His Point of View,” many men the world over do.

← The Politics of Thinness
Is “Never Give Up” a Wise Message? →
Join 4,665 other subscribers