Of Lovable Fuckups and Monkeys

☉ · by Gunmetal Geisha · in Lovable Fuckup, No Biz Like · 27 Comments 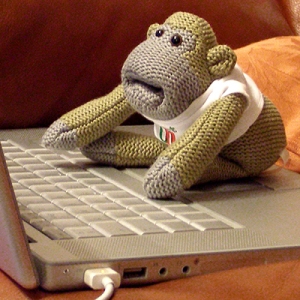 I had no money for a full fridge much less a Red camera or a trip on the Orient Express.

“You should blog,” they said.
“Hmm,” I answered.
“You’re a thinker. Write for thinkers.”
“Thinkers don’t read personal blogs. Too frivolous.”
Way to judge my reader and my material before I even begin.
“What do you consider frivolous?”
“A monkey navigating life.”
“You?”
“No. But they won’t know that.”
“Fear of failure.”
Duh.

I asked a former boyfriend, who is a musician and a great friend, if he’d written any new songs recently. He who had mainly worked on film scores of late, made a grimace and with a haughty voice he sometimes affects, answered:

“God no, song lyrics are subjective, self-indulgent. I’ve evolved out of teenage angst. Art needs to contribute to the betterment of the world.”

I’m entirely paraphrasing, but whatever he was saying, that’s all I heard.

He also once accused me of being a ‘details’ person instead of a ‘big picture’ person like he considered himself, which to me only meant I’m a perfectionist and he’s sloppy.

So I kept back the words about to leave my mouth and thought, Okay, ex-boyfriend, you’re full-on pompous. No way was I going to tell him I planned to start a blog, since my idea of blogging was the quintessence of masturbatory self-indulgence.

This encounter set me back twelve months from attempting the blog, not because I’m easily influenced by someone else’s opinion, but because the opinion in question touched on concerns I already felt — did I really want to indulge my predilection towards self-indulgence?

Here I doubled up on variations of ‘indulge’ not because my writing sucks, but to demonstrate the infinity-mirror nature of self-reflective writing.

The idea of blogging had sprung up in one conversation after another with various individuals. I was going through a period of transition, dissatisfaction and uncertainty about the direction of my life (let’s be honest, I still am), and I specifically sought advice from overachieving persons whom I both respect and don’t understand at all. I thought perhaps they could help me understand them, and in doing so, maybe I could do what they do: Achieve. Big. And in every instance, each of those baffling overachievers suggested I blog.

I was a frustrated actress trapped in a soul-killing survival job and I wanted out. I told those from whom I sought advice: I want to work for myself. I want my own at-home business around which I could audition freely. And I want to write. Prose. Poetry. A feature film.

I had written and directed a handful of no-budget shorts on little better than home-movie equipment, yet all of my small films had won online contests and monetary awards. Based on such response and people around me behaving like I had promise in filmmaking, the future seemed well-defined.

Still, I kept myself stuck in a day job where I made my own schedule at whim, but consequently earned below the poverty level. So while I had the time for a full life pursuing study, passions, and worldwide travel, I had no money for a full fridge, much less a Red camera or a trip on the Orient Express.

I’d likely be accused of being a sensitive artsy type before a born go-getter, which really means life’s lemons are little pummeling fists capable of knocking me to the ground.

When I found myself fired from that survival job, went through a crushing breakup and became technically homeless for three months, self-induced catatonia wasn’t out of the question. But somehow, within six months, I booked the one audition I’d been on in a year and half for a national commercial, won a cash prize for first place in the only poetry contest I’d ever entered, and landed the lead in a feature film for which I was flown to Sri Lanka.

Flukes? Couldn’t say. But rummaging through the hows and whys can’t hurt.

I’m a tangle of a person who has led a life of both bewildering adventure and mind-numbing idleness. I’ve enjoyed a pittance of achievement, and a heap of failure. But I remain unashamed because I’ve never failed to be exactly my own self.

So although I can’t lay claim to material about inspirational 180°s, I have a story or two about an overachiever trapped in a fuckup’s body. And you can decide for yourself if me blogging is — someone else’s — good or bad idea. (continue)

Oops, I Thought We Were All Narcissists →